Carlos Rivera rose to fame by winning the third generation of La Academia.  La Academia (The Academy) is a Mexican reality musical talent 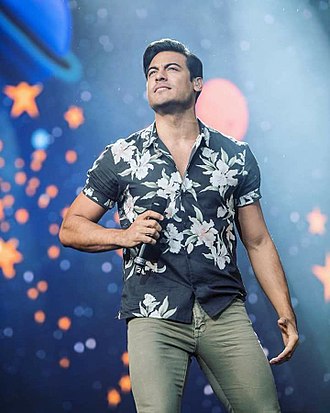 For the next two years, more than a million people saw Rivera in the role of Simba. He sold out approximately 700 shows at the Lope de Vega Theater on the famous Gran Via de Madrid, and won Best New Actor at the 2012 Broadway World Spain Awards.

The big news this year for Carlos Rivera was his announcement he voiced the Spanish language version of Disney's Lion King's Simba, “Happy to share great news! I will voice #Simba in the version dubbed in Spanish for Latin America of the new Disney film #ElReyLeón that premieres in all theaters on July 19,” he wrote. “‘The Lion King’ returns to surprise my life, it is my beautiful ‘Endless Cycle.’”

“My dream was to play Simba in The Lion King. It was one of my good choices in life,” Rivera previously told Billboard.com. “It made me learn English, in case I was ever offered the role in English. Doing musical theater helped me a lot. I knew it would generate credibility and respect. There's no cut-and-paste there."

The 33 year-old hails from Huamantla, Tlaxcala, in south-eastern Mexico.