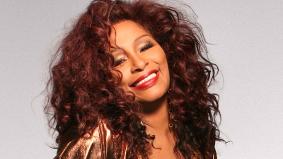 Singer-songwriter Chaka Khan makes her way to Houston’s Arena Theatre Friday, August 12, 2016.
Khan’s has been at the top of her game for decades.
It all started in the 70’s as the front woman for the funk band Rufus.  Khan was known as the queen of funk.

The cable channel VH1 ranks Khan, seventeen on their list of  the 100 Greatest Women of  Rock n Roll.
Last year she was nominated for induction into the Rock and Roll Hall of  Fame, her previous nomination was as member of the funk band Rufus.

Khan was the first artist in a line of many Pop/R&B artist to feature a rapper. She did it on her hit  "I Feel for You" in 1984.
In the course of her solo career, Khan has achieved three gold singles, three gold albums and one platinum album for I Feel for You. With Rufus, she achieved four gold singles, four gold albums, and two platinum albums. Chaka Khan in Houston at the Arean Theatre. [See below]