Tweet
Tickets to Jacob Banks @HOB-Houston in the Bronze Peacock

Jacob Banks as he heads to our HOB just played a sold out stage in Dallas, TX at Three Links.
Born in Nigeria, Jacob Banks moved to Birmingham in England at the age of 13. Not short of talent, the Brit dabbled in all forms of the creative arts and began singing, playing guitar, and writing songs at the age of 20. A music lover first and foremost, Banks got his start at open mic nights and quickly garnered a following for his commanding vocal presence and daringly intimate songwriting. His music features richly textured beats, with its 808s and synth play, African inspired grooves and a soulful disposition that culminates in an unstoppable new sound. Banks debuted with his EP The Monologue, earning feverish acclaim that saw him supporting artists such as Emeli Sandé, Sam Smith and Alicia Keys on tour around the U.K. Now, at work on his Interscope Records debut (the follow-up to self-released EP The Paradox), Banks hopes to reenergize soul music for a new generation hoping to be their solace in hard times and a battery pack on a slow Monday morning.

Jacob became the first unsigned act to ever appear on BBC Radio 1 Live Lounge. Jacob Banks won the 2012 MOBO UnSung regional competition in Birmingham and the Adidas "Are You In" music competition. His music is influenced by a range of genres including soul, R&B and hip-hop. In September 2016 he signed with Interscope Records.

His song "Unknown" was featured in the Season 3 finale of the Starz TV series Power, and received viral attention for his tremendous voice. This attention led to the song "Monster" featuring in the first episode of Season 4 .

In 2017, his song "Unholy War" was featured in the season finale of the TV series The Blacklist:Redemption. 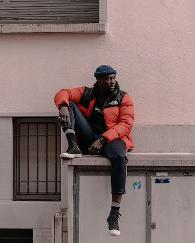 "Barcelona!! Thank you so much for the love, good food and sold out show last night We are Sold out in Madrid tonight eating good and living lavishly, see you soon."