This Christmas, be moved by Handel’s ever-glorious setting of the greatest story ever told. The Houston Symphony, chorus and guest soloists join forces to fill Jones Hall with joyous refrains and exultant arias, including the powerful “Hallelujah” Chorus.

Its their annual performance of Handel's Messiah at Jones Hall this weekend. December 20-22, 2019.

Handel's Messiah is performed worldwide throughout the holiday season. The English composer created this seasonal oration around 1730 and it has been celebrated ever since. Handel is know for composing Italian opera. But by the early 1730s public taste for Italian opera was beginning to fade. Messiah was his sixth work in this genre.

Although its structure resembles that of opera, it is not in dramatic form; there are no impersonations of characters and no direct speech. Instead, Jennens's text is an extended reflection on Jesus as the Messiah called Christ. The text begins in Part I with prophecies by Isaiah and others, and moves to the annunciation to the shepherds, the only "scene" taken from the Gospels. In Part II, Handel concentrates on the Passion and ends with the "Hallelujah" chorus. In Part III he covers the resurrection of the dead and Christ's glorification in heaven.

Handel wrote Messiah for modest vocal and instrumental forces, with optional settings for many of the individual numbers. In the years after his death, the work was adapted for performance on a much larger scale, with giant orchestras and choirs. In other efforts to update it, its orchestration was revised and amplified by (among others) Mozart (Der Messias). In the late 20th and early 21st centuries the trend has been towards reproducing a greater fidelity to Handel's original intentions, although "big Messiah" productions continue to be mounted. A near-complete version was issued on 78 rpm discs in 1928; since then the work has been recorded many times.

Here is how it goes:

In Christian theology, the Messiah is the savior of humankind. The Messiah who is called Christ, is identified with the person of Jesus, known by his followers as the Christ or "Jesus Christ". Handel's Messiah has been described by the early-music scholar Richard Luckett as "a commentary on [Jesus Christ's] Nativity, Passion, Resurrection and Ascension", beginning with God's promises as spoken by the prophets and ending with Christ's glorification in heaven. In contrast with most of Handel's oratorios, the singers in Messiah do not assume dramatic roles; there is no single, dominant narrative voice; and very little use is made of quoted speech. In his libretto, Jennens's intention was not to dramatise the life and teachings of Jesus, but to acclaim the "Mystery of Godliness", using a compilation of extracts from the Authorized (King James) Version of the Bible, and from the Psalms included in the 1662 Book of Common Prayer.

The three-part structure of the work approximates to that of Handel's three-act operas, with the "parts" subdivided by Jennens into "scenes". Each scene is a collection of individual numbers or "movements" which take the form of recitatives, arias and choruses. There are two instrumental numbers, the opening in the style of a French overture, and the pastoral Pifa, often called the "pastoral symphony", at the mid-point of Part I.

In Part I, the Messiah's coming and the virgin birth are predicted by the Old Testament prophets. The annunciation to the shepherds of the birth of the Christ is represented in the words of Luke's gospel. Part II covers Christ's passion and his death, his resurrection and ascension, the first spreading of the gospel through the world, and a definitive statement of God's glory summarized in the "Hallelujah". Part III begins with the promise of redemption, followed by a prediction of the day of judgment and the "general resurrection", ending with the final victory over sin and death and the acclamation of Christ. According to the musicologist Donald Burrows, much of the text is so allusive as to be largely incomprehensible to those ignorant of the biblical accounts. For the benefit of his audiences Jennens printed and issued a pamphlet explaining the reasons for his choices of scriptural selections. 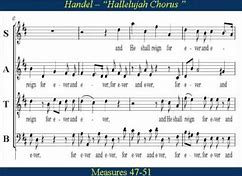