It was the late Marvin Gaye that encouraged Frankie Beverly to change the band's name from Raw Soul to Maze. The band (Maze) and Beverly would tour with Marvin Gay back in the mid 70's. This weeked Maze Featuring Frankie Beverly with Special Guests The

Isley Brothers And LeVelle will be at Toyota Center.

Over the next decade, Maze released a series of well crafted, well received albums that uniformly hit top 10 Soul and pulled onto the Top 100 pop charts based on sales among black audiences.

It was Chris Rizik of Soultracks.com that reviewed the group this way: "By any measure, one of the most talented but criminally underappreciated self-contained bands of the past three decades has been Frankie Beverly and Maze. Their ability to fuse soul and jazz with an irresistible groove and intelligent lyrical content has gained for them an extremely loyal following among Soul music fans and great respect among their performing peers, but little attention in the pop music world."

"While clearly talented, Beverly and his various bands were not the prototypical Philly soul acts, and in the early 70s he moved with his new group to San Francisco, where he met Marvin Gaye, who took a liking to the group and helped them land a contract with Capitol Records under the new name Maze Featuring Frankie Beverly."

"The group's Capitol debut was a Soul smash, yielding the hit "While I'm Alone" and hitting the Soul top 10. As with the act's future albums, the subtle jazz stylings and smooth grooves were extremely appealing to Soul music fans, but had almost zero pop crossover. Over the next decade, Maze released a series of well crafted, well received albums that uniformly hit top 10 Soul and pulled onto the Top 100 pop charts based on sales among black audiences. The group also released a number of memorable singles, including "Joy and Pain," "Southern Girl," "Love Is The Key," "Back In Stride" (a #1 Soul hit) and "Can't Get Over You" (another #1)." 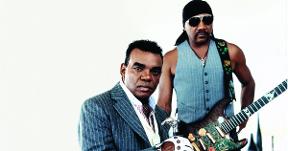 The Isley Brothers came out Cincinnati, Ohio, and were raised in the city's Lincoln Heights suburb, settling in the satellite town of Blue Ash when they were teenagers. Their father, O'Kelly Isley, Sr., a former United States Navy sailor and vaudeville performer from Durham, North Carolina, and their mother Sallye, from Georgia, guided the four Isley boys in their singing in church. The brothers began performing together in 1954, patterning themselves after groups such as Billy Ward and His Dominoes and The Dixie Hummingbirds.

LeVelle is what the music industry people call a neo-soul artist and songwriter. LeVelle's latest music is "My Journey Continues Album".