Get ready for another hair-raising adventure when Poppy, Branch and their friends come to life on-stage in Trolls LIVE!, their first ever live tour! The journey begins when the Trolls’ Hug Time is unexpectedly put at risk. Knowing that the only way to save it is by doing what the Trolls do best, Poppy hosts a toe-tapping, Trolls-tastic show, jam-packed with all the epic music, glitter, humor and happiness that only the Trolls can create. This is one Trolls party you won’t want to miss! More info at www.thehobbycenter.org or 713.315.2525.
Sat Dec 28, 2019 10am & 2:30pm
800 Bagby St, Houston, TX

Following five successful years of touring and more than 500 performances, the “most famous reindeer of all” from the longest running and highest rated holiday television special will fly into The Grand with Rudolph, the Red-Nosed

Highlights of Allan's show include:
Houdini 2.0: Tackles the legendary Harry Houdini’s most dangerous illusions while incorporating modern technology, such as combining immersive video mapping technology with a thrilling underwater escape.
The Laser Saw: A modern twist on the classic “cut a person in half” trick

Jamie Allan has toured the U.K. for four years with iMagician, which opened at the Garrick Theatre in London’s West End in 2015.
Holding the accolade of being the most televised British illusionist of the last decade, Allan first showcased his iMagic on ITV’s ‘This Morning’ in 1995 when he was just a teenager. Allan has since performed his signature iPad illusion “Digital Art” live on the BBC One Show, ‘Grand Cabaret Du Monde’, ‘BBC Breakfast’, ‘The Slammer’ and ‘Penn and Teller: Fool Us’. He has also been seen as a star mentor on ITV1 in the prime time show ‘Get Your Act Together’, has appeared as the special guest star on ‘Michael McIntyre’s Big Show’, and was a winner of ITV prime time show ‘The Next Great Magician’.
More info at www.thehobbycenter.org
Sat Dec 28, 2019 2pm & 8pm
800 Bagby St, Houston, TX

Enjoy your weekend with an Extra 20% off After Christmas Sale with code JOY at Macys.com! Exclusions apply. Valid 12/26-1/1. 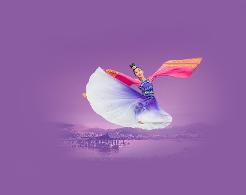 Shen Yun invites you to travel back to the magical world of ancient China. Experience a lost culture through the incredible art of classical Chinese dance, and see legends come to life. Shen Yun makes this possible by pushing the boundaries of the performing arts, with a unique blend of stunning costuming, high-tech backdrops, and an orchestra like no other. Be prepared for a theatrical experience that will take your breath away! More information at www.shenyun.com
Sat Dec 28, 2019 7:30pm
615 Louisiana St, Houston, TX