Weird Al Yankovic is known for his humorous songs that make light of popular culture and often parody specific songs by contemporary musical acts, original songs that are style pastiches of the work of other acts, and polka medleys of several popular songs, featuring his favored instrument, the accordion.
This weekend Weird Al makes his way to The Woodlands at the Cynthia Woods Mitchel Pavilion Saturday June 15, 2019.
Since his first-aired comedy song in 1976, Weird Al has sold more than 12 million albums (as of 2007), recorded more than 150 parody and original songs, and performed more than 1,000 live shows. His works have earned him five Grammy Awards and a further eleven nominations, four gold records, and six platinum records in the United States. Yankovic's first top ten Billboard album (Straight Outta Lynwood) and single ("White & Nerdy") were both released in 2006, nearly three decades into his career. His latest album, put out in 2014, Mandatory Fun, became his first number-one album during its debut week.
. . .

Driven by a five-part composition, the show brings viewers from the depths of the sea, up to coastlines, over mountains, and soaring into the sky. Each movement results in a powerful musical tribute to the beauty and wonders of our wild world.
. . . more National Geographic symphony click here

In this dramatic retelling of France’s infamous young monarchs, history becomes HERstory as Stanton Welch’s Marie returns to the Wortham Theater Center to close Houston Ballet’s 2018/19 season this weekend.
The past unfolds in the three-act ballet that chronicles the Queen’s life in a time of immense social and political strife for the people of France. Returning to the role originally created for her in 2009, Melody Mennite, Houston Ballet Principal Dancer will dance the ballet’s namesake once again.
. . .more Houston Ballet Marie click here 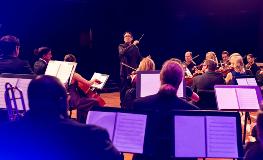 This weekend in NRG Park

Another hot Houston summer is almost here so it’s time to look for ways to keep cool in the summer sun. And the best place to do that is the Houston Summer Boat Show.
For 5 days only, you will find the best deals on boats and accessories, and lots of other fun stuff, anywhere in Houston. With so many retailers in one place, it’s the perfect opportunity to find what boat fits you best, to get advice from the boating experts and to compare prices.
The 2019 Houston Summer Boat Show will feature hundreds of powerboats and personal watercraft, fishing gear, fishing experts, wake and ski experts and fun activities for the whole family.