My Brother, My Brother and Me
@Jones Hall for the Performing Arts

Tickets to My Brother, My Brother and Me @Jones Hall for the Performing Arts

My Brother, My Brother and Me is an advicecast for the modern era featuring three real-life brothers: Justin, Travis and Griffin McElroy. For roughly five-sixths of an hour each week, with new episodes dropping every Monday, the brothers McElroy will answer any query sent our way, each fielding questions falling into our respective areas of expertise. We operate like a streamlined, advice-generating machine. It’s both terrifying and humbling to behold.

Justin, Travis, and Griffin McElroy are the force behind a series of very successful podcasts, most notably MY BROTHER MY BROTHER AND ME and THE ADVENTURE ZONE. Each get upwards of 300k unique downloads per episode, and regularly chart on iTunes. MY BROTHER MY BROTHER AND ME has also launched as a Seeso series, and will be renewed for a second season (or more) shortly. Their tour dates sell out immediately, and regularly crash the servers of their ticketing partners.

THE ADVENTURE ZONE is being adapted into a comic book, and has already spawned a zine of fan art. Griffin McElroy has also been tapped to write a piece of Star Wars prose for a new and upcoming anthology.

Justin, Travis, and Griffin McElroy are the force behind a series of very successful podcasts, most notably MY BROTHER MY BROTHER AND ME and THE ADVENTURE ZONE. Each get upwards of 300k unique downloads per episode, and regularly chart on iTunes. MY BROTHER MY BROTHER AND ME has also launched as a Seeso series, and will be renewed for a second season (or more) shortly. Their tour dates sell out immediately, and regularly crash the servers of their ticketing partners.

THE ADVENTURE ZONE is being adapted into a comic book, and has already spawned a zine of fan art. Griffin McElroy has also been tapped to write a piece of Star Wars prose for a new and upcoming anthology.

Justin, the oldest brother, lives in Huntington, West Virginia, and works as an editor-at-large at Polygon, a video game website.
He also co-hosts the medical history podcast Sawbones with his wife, Dr. Sydnee McElroy. In 2016 Justin co-invented asynchronous podcasting with Roman Mars, creating the first episode of Smart Stuff which began in episode 316 of MBMBaM and was completed in episode 225 of 99% Invisible, hosted by Mars. Justin also hosted a YouTube show called "Things I Bought at Sheetz" with Dwight Slappe. He and Griffin McElroy host a gaming comedy show called Monster Factory in which they attempt to create hideous characters in video game character creators.

Travis, the "middlest" brother, lives in Cincinnati, Ohio, and worked as the Technical Director for the Cincinnati Shakespeare Company before becoming a full-time podcaster. He also co-hosts the doomsday prepping comedy podcast Bunker Buddies with Andie Bolt,a podcast on frustrations and rants with Tybee Diskin called Interrobang, a podcast on manners called Shmanners and a media podcast, The Kind Rewind, with his wife, Teresa McElroy, a podcast on current events with Brent Black called Trends Like These, and a podcast called Surprisingly Nice with Hal Lublin. Travis additionally produced the podcast Can I Pet Your Dog?, hosted by Allegra Ringo and Renee Colvert. 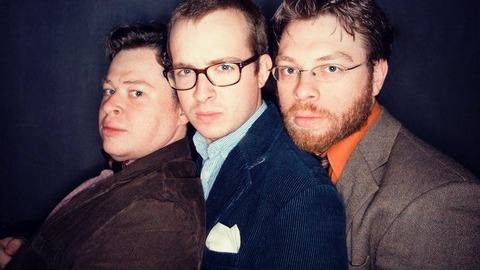 Griffin, the "sweet baby brother and 30 Under 30 media luminary," lives in Austin, Texas, and is a senior video producer for Polygon. He has also co-hosted the video game podcast "Cool Games, Inc." for Polygon, along with let's play series such as "Car Boys" and "Touch the Skyrim", and a podcast about The Bachelor and similar TV programs called Rose Buddies with his wife, Rachel McElroy. Griffin and Rachel currently host a podcast titled "Wonderful!" In addition, Griffin was named one of Forbes' "30 under 30" for the year 2017.

West Virginian Marion Meadows, grew up in Stamford, Connecticut. Meadows began playing the clarinet and studying classical music at at nine. He started playing tenor sax in high school, and then moved to soprano sax. His passion for various types of music led him down an eclectic musical path. He was intrigued by the styles of jazz musicians, like Stanley Turrentine, Sidney Bichet, Johnny Hodges, John Coltrane, Sonny Stitt, Rahsaan Roland Kirk, Dexter Gordon, Cannonball Adderley, Coleman Hawkins, Sonny Fortune, Joe Henderson, Grover Washington and many others. After studying jazz at Rippowam High School in Stamford, CT with Anthony Truglia, Meadows attended Berklee College of Music. There he majored in arranging and composition. He later went to the SUNY Purchase School for the Arts. During his college years he played in a number of bands including disco, R&B and various jazz ensmbles. I got a lot of sideman jobs in college, and I have always said I got my real graduate degree playing clubs, says Meadows, who perfected his craft studying with Sonny Fortune, Joe Henderson, Dave Liebman and Eddie Daniels. “Not long after I ﬁnished school, (drummer) Norman Connors recorded one of my songs, “Invitation” and then asked me to join his band. I later produced his Passion album with my colleague Jacques Burvick (Aquarium Dream) . Things just fell into place.

Meadows ﬁrst hit the airwaves in 1991 with “For Lovers Only”, but his career really began one day in the late ‘80s at New York’s Grand Central Station. He had been a sideman with Connors for three years, with only vague notions of eventually going solo. One day, while waiting for a train, he pulled out his horn and began playing under the huge dome. His sweet sound caught the attention of fellow traveler, producer and TV composer Jay Chattaway, who happened to be passing by on his way to the train.

Chattaway was so impressed with Meadows’ sound that he hooked Meadows up with legendary keyboardist Bob James. Meadows and James collaborated on a recording which unfortunately went unreleased. The experience put him on the road to his eventual success. Meadows hooked up with numerous artists and musicians and became a well known sideman in his own right, recording or performing over the years with Brook Benton, Eartha Kitt, Phyllis Hyman, Jean Carne, The Temptations, Michael Bolton, Angela Boﬁll, Will Downing , Bob Baldwin, Chuck Loeb, John Lee, among many others. In the late ‘80s, Meadows stretched his boundaries by becoming a member
of a New York avant-garde band called the Aboriginal Music Society. In 1990 Meadows submitted a solo project to Steve Backer at Novus/RCA and was signed to a recording contract, thus marking the beginning of his solo career. Meadows’ ﬁrst RCA release “For Lover’s Only” was a huge success and was followed by his ground breaking “Keep it Right There” album. He became a staple of the contemporary jazz format with his subsequent recordings, which include Body Rhythm (1994) and Forbidden Fruit (1996), Passion (1997), Another Side Of Midnight (1999), Next To You (2000), In Deep (2002), Players Club (2004), Dressed To Chill (2006), Secrets (2009) Whisper (2013) and Soul Traveler his current release on the New York based Shanachie Label. Meadows is a semi-pro cyclist, graphic artist and designer.

The term “Renaissance Man” dates back to the time of Leonardo da Vinci, who was described as a man of “unquenchable curiosity” and “feverishly inventive imagination.” Paul Brown’s four decade journey through the worlds of pop, R&B and jazz is the modern day musical equivalent. Starting as a drummer, he became an engineer for R&B legends (Diana Ross, Luther Vandross, Aretha Franklin) before evolving into a two time Grammy winning urban jazz producer (with over 60 #1 radio airplay hits) and finally a popular guitarist, artist and performer in his own right.

In the remarkable 12 years since he released his debut album Up Front, Brown has released six albums (including three that hit the Top Ten on the Billboard Albums chart), scored countless hit singles, and done thousands of performances across the U.S. and internationally, including gigs with fellow guitarists Larry Carlton, Chris Standring and current labelmate Marc Antoine (with whom he recorded the 2009 album Foreign Exchange). And yet, as he releases One Way Back, his third collection on Woodward Avenue Records after The Funky Joint (2012) and Truth B Told (2014), Brown freely admits he is still trying to find himself as an artist.

While keeping his trademark deep funk and cool urban vibes flowing, Brown taps deeper than ever before into his lifelong blues influences, which includes a foundational passion for greats like Stevie Ray Vaughan, Eric Clapton, Buddy Guy, Little Feat and B.B. King. This edge is immediately apparent on the album’s lead single, a bold and fiery re-imagining of The Crusaders’ soul-jazz classic “Put It Where You Want It,” which he describes as a “combination of Wes Montgomery and Larry Carlton,” the latter who played on the original recording of the tune.

“Even after all these years,” he says, “I truly feel that I’m continuing to evolve as a guitarist, and I’m glad the way the genre is right now allows artists to follow the deeper passions of their musical hearts more than ever before. With each album, I feel like I’ve grown as a musician and artist, and I’m a far different player than I was when I recorded Up Front. When that came out, I had never performed a live show as a guitarist. You can practice an instrument in a room all you want, but until you play live, you don’t acquire a full level of skills. All of that gigging has helped me grow technically, and playing what I have imagined in my head is a lot easier than it used to be. The freedom and confidence I have gained from those translates to my personal development and allows me to bring fresh new ideas into the studio.”

While extending his long history of collaborations with the genre’s top saxophonists with “Sexy Thang” featuring Darren Rahn, One Way Back’s deeper musical core is a series of dynamic collaborations with top genre guitarists Chris Standring, Peter White, Marc Antoine and Chuck Loeb. While Brown’s electric is front and center as the lead melodic voice, he lets each of his peers bring his own sonic aesthetic to the mix as he “interprets inside of it.” Other highlights are the powerhouse, brass fired Memphis soul influenced “Well Alright” featuring vocalist (and former Hi Records songwriter Don Bryant) and the rich blues-drenched closer “Heaven” featuring vocals by Brown and simmering Rhodes and Hammond B-3 textures by his blues keyboardist friend with the same name known as “Brother Paul Brown.”

The Los Angeles born and raised guitarist’s R&B driven sound has been a foundational element in urban jazz since the early 90s, when he produced saxophonist Boney James’ breakout debut Trust. He has since worked with many of the genre’s most influential artists, including Carlton, White, Euge Groove, Rick Braun, Kirk Whalum, Jeff Golub, Al Jarreau and Jessy J. “Winelight,” the second single from Brown’s sophomore album The City, was ranked by Mediabase as the genre’s most spun track of that year. Radio & Records and Mediabase declared “The Rhythm Method,” the first single from Brown’s third release White Sand, the most played song of 2007. The title track from Jessy J’s Brown-produced debut Tequila Moon earned the same distinction for 2008.