Come from Away is a Canadian musical with book, music and lyrics by Irene Sankoff and David Hein. It is set in the week following the September 11 attacks and tells the true story of what transpired when 38

planes were ordered to land unexpectedly at Gander International Airport in the small town of Gander in the province of Newfoundland and Labrador, Canada as part of Operation Yellow Ribbon. The characters in the musical are based on (and in most cases share the names of) real Gander residents as well as some of the 7,000 stranded travelers they housed and fed.

In October 2018 it became the longest-running Canadian musical in Broadway history, surpassing The Drowsy Chaperone's previous record of 674 performances.

The musical has been received by audiences and critics as a cathartic reminder of the capacity for human kindness in even the darkest of times and the triumph of humanity over hate.

Emanuel Ax and Principal Keyboard Scott Holshouser are featured in The Carnival of the Animals, and each concert showcases a different lineup of dazzling solo performances by orchestra

This Sunday its pop rapper and skateboard enthusiast, Tyler, The Creator at Toyota Center.

Andy Kellman of All Music.com says, "One of the more fascinating artistic evolutions since the late 2000s has been that of Tyler, The Creator. The rapper and producer surfaced as a founding member of Odd Future, an outlandish alternative rap crew that gradually permeated the mainstream as it begat a multitude of related projects. A high percentage of these recordings, including Earl Sweatshirt's Earl (2010), Odd Future's The OF Tape, Vol. 2 (2012), and Frank Ocean's Grammy-winning Channel Orange (2012), have been made with Tyler's deep involvement.

As a solo artist, Tyler's output has gleefully swung from purposefully distasteful and crude to charming and sophisticated, sometimes blurring the distinction between the extremes. His first four solo albums, namely Goblin (2011), Wolf (2013), Cherry Bomb (2015), and Flower Boy (2017), debuted within the Top Five of the Billboard 200, distinguished above all other unique qualities by his gravelly voice and an irascible disposition befitting a collision-shop owner. The widespread embrace of the kaleidoscopic Flower Boy, a number two hit nominated for a Grammy in the category of Best Rap Album, has led to a pair of subsequent number one albums: IGOR (2019), another Grammy-nominated recording, and CALL ME IF YOU GET LOST (2021), which expanded the artist's stylistic reach while reaffirming his devotion to hip-hop with a raw lyrical approach. (Read more @ All Music.com Click Here)

An accomplished composer, violinist, conductor, fencer, and dancer, Joseph de Bologne became the toast of Paris in the early 1770s. The son of a plantation owner and an African slave, the younger mixed-race Bologne acquired the title Chevalier de Saint-Georges thanks to Louis XV, in whose personal guard he briefly served, and eventually became a favorite of Marie Antoinette. 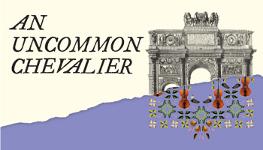 With a tuneful violin concerto from Saint-Georges, a comparable work from a contemporary, and a symphony commissioned by the Chevalier, this program transports us to a lively Parisian concert hall in the mid 1780s, just before the Revolution changed everything.