André started playing at the age of 20. He sings in different styles that include mainly traditional and popular elements of flamenco and rumba music. Parallel to his composition work for the Gipsy Kings, André started to compose for himself in a more Rock Flamenco style. He recorded some songs just for fun and played them on stage during the Gipsy Kings concerts like La Negra and fue asi.

André has the most glamorous and passionate voice, which makes him one of the most famous flamenco singers in the world. With the Gipsy Kings, he has sung the most successful songs like Bamboleo, Volare, La Dona and many others.

With 20 million albums sold worldwide, the Gipsy Kings won in 2014 the Grammy Award for their album "Savor Flamenco".

(From All Music.com-Thom Jurek) Christian Nodal is a singer, songwriter, and multi-instrumentalist from Mexico. His charting, award-winning sound weds mariachi to norteño and sometimes, pop hooks. His vocal instrument is a rich, emotionally expressive romantic tenor. Backed by a mariachi orchestra he issued "Adiós Amor," his debut single, in 2016; it reached the top of the Mexican Regional charts and remained there for more than six months. 2017's much-anticipated debut album, Me Dejé Llevar, went to number two in the U.S. Each of its four singles was certified multi-platinum. 2019's Ahora long-player experienced similar success as Nodal established his reputation across the Americas on tour. Ayayay! was initially issued as an EP in May 2020, but was expanded to a full-length Top Ten album in September 2021. In February 2022, he collaborated with Mana on their duo hit single "Te Llore un Rio" and followed with the Forajido EP in May.

Nodal was born in 1999 into a musical family. His mother, Silvia Cristina Nodal, was a professional mariachi singer and serves as her son's manager. His father, Jaime González, owns an independent record label and served as producer for Ariel Camacho. Further, many of his uncles, aunts, and cousins are musicians.

Nodal began singing at four and at eight gravitated toward musical instruments. He taught himself to play piano, guitar, trumpet, and later, the accordion. He began writing songs at age 13 and posting videos of his performances on social media. He drew the attention of Fonovisa's A&R department, which signed him in 2016. After inking his record deal, he appeared as a featured vocalist in the video for Los Plebes del Rancho's hit "No Pasa de Moda" in 2019, which garnered over 22 million views. That year he won Regional Mexican Male Artist of the Year at the Lo Nuestro Awards. Read more @All Music.com (Click Here)

The historic tradition of mariachi music has roots in cities like Guadalajara and Mexico City.

Today, the future of the evolving genre rests in the hands of a dynamic ensemble from the capital of the American Midwest: Chicago’s Mariachi Herencia de 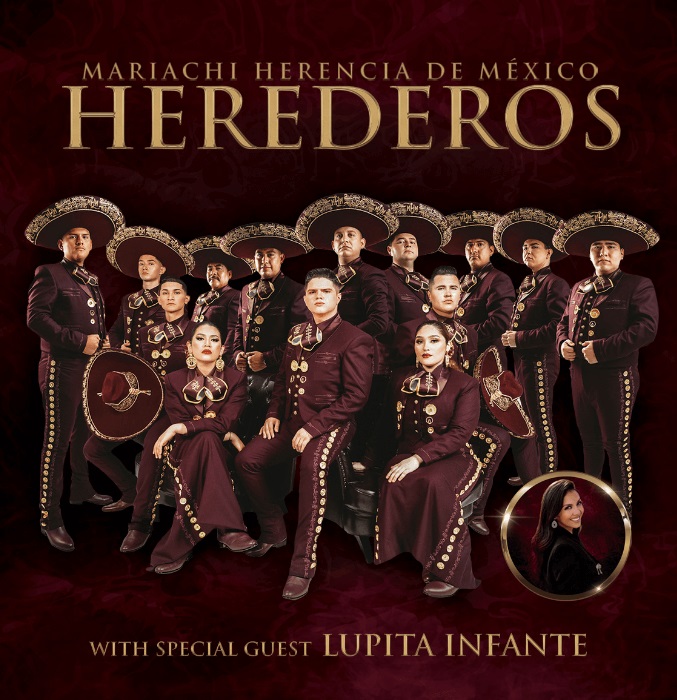 México. The Latin Grammy-nominated group of young Mexican-American musicians, recognized as the new ambassadors of the mariachi tradition, perform a vibrant tribute to the golden age of Mexican music. Joined by the beautiful Lupita Infante, granddaughter of Mexican icon Pedro Infante, Mariachi Herencia de México and Infante honor the legacy they inherited with a colorful and unforgettable experience of Mexican music and culture.

Bryson Brown is a stand up Comedian from Austin, TX who has toured the nation opening for Ali Siddiq, DeRay Davis, Adele Givens and more of your favorite comics, as well as headlining his own sold out shows on his critically acclaimed Jokin' and Smokin' Tour.

His new Comedy Album “Side Bettin” available on all online platforms “Apple Music, Tidal, Spotify, Band Camp” . Released June 9th, it hit #1 on the iTunes Comedy charts independently. Named one of the funniest comics in the U.S by his peers Bryson’s smooth and laid back approach to everyday life situations makes him a crowd favorite. His ability to pick through the smallest point of the subject, and always choosing material that’s hits close to home.