Bronco experienced international fame with help from their international hit Que No Quede Huella (May No Traces Be Left) from their 1989 album A Todo Galope, for which they toured the United States, Puerto Rico, Spain, Argentina, Venezuela, Peru and many other countries. They gained additional fame in 1993, when they acted in the Televisa soap opera, Dos Mujeres, un Camino (Two Women, one Road), alongside Erik Estrada, Laura León, Lorena Herrera, Selena and Bibi Gaytán, among others. In addition to acting, they performed the opening song, which was titled like the show. The album Pura Sangre, which included the song Dos Mujeres, un Camino, earned gold and platinum records in Mexico, Chile, Argentina, Bolivia and Paraguay. Many of Bronco's albums have achieved solid sales in the United States. 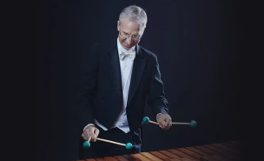 Principal Percussionist Brian Del Signore makes an extra-special Houston Symphony solo debut, performing the marimba movement from his own Percussion Concerto. Plus, hear Celestial Blue by Grammy and Pulitzer Prize-winning composer Jennifer Higdon, followed by an invigorating early masterpiece by Benjamin Britten. The concerts close with Brahms’s genial Serenade No. 2, delightful music that foreshadows the great symphonic voice that was soon to emerge. Tickets at 713.224.7575 or www.houstonsymphony.org

Beginning as a stand-up comedian, Robinson first made his mark in the comedy circuit at the 1998 Montreal “Just For Laughs” Festival. Now headlining venues and festivals across the country, he does both solo acts as well as full-band sets with his band “The Nasty Delicious.” Before deciding to pursue his comedy career full time, Robinson was a K-8 teacher in the Chicago Public School System. He earned his undergraduate degree from Illinois State University and his Masters of Education from St. Xavier University. It was while Craig was studying education in Chicago that he also discovered his love of acting and comedy when he joined the famed Second City Theatre. Craig is best known for his portrayal of Darryl Philban in NBC’s “The Office” but has also starred in such movies as KNOCKED UP, THIS IS THE END, HOT TUB TIME MACHINE, HOT TUB TIME MACHINE 2, MORRIS FROM AMERICA, TRAGEDY GIRLS, DOLEMITE IS MY NAME! with Eddie Murphy, TIMMY FAILURE, and the upcoming MONA LISA AND THE BLOOD MOON with Kate Hudson. Craig also starred in his very own sitcom, MR. ROBINSON on NBC, as well as GHOSTED on FOX.