Damien Escobar once a self-proclaimed retired artist is now back to being one of the world’s top violinist. This weekend Escobar is at LiveNations's HOB Houston in GreenStreet Downtown.

A lot of people have taken note, but so have the media - the gatekeepers of information, with major feature stories in People Magazine, Huffington post, CNN, The NY Daily News and Chicago Tribune. The star even found his way back on national television, performing on WETV’s “David Tutera’s: Unveiled”. Since then invitations to appear on television haven’t ceased; landing Escobar in the interviewee chair at every major network on both a local and national scale including Fox News, The Hallmark Channel, The Katie Couric Show, Empire Live , NBC, CBS and ABC.

A constant creator Damien has had his hand in a plethora of entrepreneurial endeavors including penning his first children’s book entitled “The Sound of Strings”, a signature line of violins, a partnership to develop his own line of wines, a nonprofit organization as well as a children’s focused music program.

Four years ago Damien was a shell of himself. Humbled by homelessness and depression, Damien had to fight through his fear of failure and reemerge as a confident, positive, thriving artist.

As a veteran knowing the ups and downs of the industry, he has committed to centering his career around the loyal fans whom he refers to as"good people" and who constantly remind him of why he returned to music. With this in mind it has been important to the “violin crooner” to build a brand that is inclusive of his global fan base.

Today Damien’s solo career is moving at lightning speed. Damien is currently promoting his newest single, Get Up And Dance, which is the lead single from his second solo album, “Boundless”. The “Boundless” album in particular is important to Damien as it marks Damien’s first solo album of all originally produced material. The nationally executed Boundless Tour has brought Damien to a number of US cities for an unprecedented number of sold out shows in various major markets including Chicago, Philadelphia, Los Angeles and New York City. His single Freedom premiered at #15 on the iTunes dance charts and subsequently broke the iTunes Hot 100 Top 10. 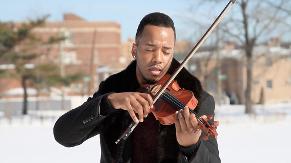 Four years ago Damien was a shell of himself. Humbled by homelessness and depression, Damien had to fight through his fear of failure and reemerge as a confident, positive, thriving artist. Today he has arrived. An unprecedented story of triumph, Damien Escobar can look back at his days playing the violin for change on the subway platforms of New York to playing for Presidents in the White House. Unpretentious yet confident, Damien makes no secret of the determination necessary to gain the recognition he has obtained while becoming one of the few commercially successful mainstream violinist. Damien Escobar is a musical pioneer dominating an industry that’s ready for change. The future of the music industry rests in his hands - and he’s ready.