This second Friday of  November heading up to our Thanksgiving holidays is full of family and singles events in our Bayou City.

But our metro leadership continue to warn everybody the threat of covid is still at extreme levels.  Please everybody, keep say with venue protocols and enjoy your

This weekend let’s start with Disney On Ice's Let's Celebrate! at NRG Stadium, Jimmie Vaughan with his "The Story Tour" and with his special guest Sue Foley at The Heights Theatre in northwest Houston, Foley will be doing a solo performance.

The comedy "Dos Mas Dos" is at Houston's Arena Theatre, we would like to note to our non-bilingual readers this performance is in Spanish. They call me "Tater Salad" a moniker earned by comedian Ron White is in concert in Sugarland, Texas this evening at Smart Financial Center.

(Read below for event details)
Enjoy your Weekend Fridays.

was a while ago Grillz appeared on The Jerry Springer Show to reveal his identity, which was previously hidden in a bear costume. Grillz says he used a MacBook Pro and watched music production tutorials on YouTube developing his electronic dance music(EDM)career.

In true Texas fashion, four-time Grammy-winner Jimmie Vaughan has helped breathe new life into the music that has been his lifeline all these decades, becoming a hero to those who cherish America's real gift to musical history. This weekend Vaughan will be in Northwest Houston at The Heights Theatre.

"When I talk about country and blues, they're the same thing," Jimmie Vaughan says. "Muddy Waters and Hank Williams, Webb Pierce and Jimmy Reed. When I was a kid, I didn't understand the difference. Everybody was always asking me, 'Why do you want to play blues? Why don't you play country?' But I would listen to the country guys and they would be doing a Jimmy Reed song. They're playing the same lick. And Ray Charles, Little Milton, Guitar Junior, Lonnie Brooks, B.B. King--they all did country songs. Is Bob Wills country blues or jazz? And the answer is, it's American music. I'm tired of trying to pigeonhole everything. I want to bring it together; it comes from the same place."

"When he first heard songs like Phil Upchurch's "You Can't Sit Down," The Nightcaps' "Wine, Wine, Wine" and B.B. King's many hit songs in the early 1960s, he knew he had found his music."

As a young teenager in Oak Cliff, Texas, his father told him to take guitar lessons if he wanted to really learn the instrument. But when Vaughan's teacher told the guitar student it wasn't going to work because the stu

dent "was too far gone" to learn from the lesson books, Jimmie Vaughan knew he was on his own. Which was perfect for him, because the blues would be his teacher for life. For those who find themselves living inside this true American music, it becomes a way of life, and a musical force to follow forever.

The hilarious couple comedy DOS + DOS, arrives at the Arena Theater, after having swept during its world tour.

Adal Ramones, Freddy Ortega, Monica Dionne, Plutraco Haza, Mauricio Islas and Sabine Moussier star in this theatrical adaptation of the film of the same name that has been so successful in Argentina, his native country, since its premiere in 2012.

Adrián and Julieta, Tomás and Silvia, are two lifelong pairs of friends who as they approach forty have achieved professional and personal success, at least it seems so. Adrián and Julieta have been happily married for years and have a pre-adolescent son. Tomás and Silvia, however, have preferred not to marry or have children and enjoy their life as a couple the two of them alone. Or not so alone ...

Is it possible to keep passion alive in long relationships? What happens to desire when a family is formed? Is love enough to keep a couple together?

Whether you are a shopper, committee member, staff member, donor, volunteer, merchant, vendor, sponsor, or social media follower, YOU have been an integral part in making this Market the success that it is. Without your interest, curiosity, passion, dedication, enthusiasm, generosity, hard work, commitment, and love… the Market simply wouldn’t be where it is today. Since our inception in 1981, YOU have helped us contribute over $75.3 million dollars to the Houston Ballet Foundation in support of its Academy and scholarship programs. Although saying “Thank You” does not seem to be enough, we are truly grateful for 40 years of support. See www.nrgpark.com for more info or go to www.houstonballet.org
Friday, November 12, 2021 10:00 AM
NRG Park, 1 NRG Parkway, Houston, TX 77054
Directions (map)

Weekend Book Read
Will  by Will Smith,
Mark Manson
This memoir is the product of
a profound journey
of self-knowledge . . .
(Click Here)

Comedian Ron “Tater Salad” White first rose to fame as the cigar-smoking, scotch-drinking funnyman from the Blue Collar Comedy Tour. The Blue Collar Comedy Tour was a comedy troupe, featuring Jeff Foxworthy with three of his comedian friends, Bill Engvall, Ron White, and Larry the Cable. This weekend Ron White makes his way to Sugarland at the Smart Financial Center.

White's stories relay tales from his real life, ranging from growing up in a small town in Texas to sharing stories of his daily life to becoming one of the most successful comedians in America. He has sold over 14 million albums (solo and with the Blue Collar Comedy Tour), been nominated for two Grammys, and has consistently been one of the top grossing stand up comedians on tour.

In November of 2003, White released his breakthrough comedy CD Drunk In Public followed by his first one-hour TV comedy special They Call Me Tater Salad. The special had the highest viewership for a Sunday program in

[From: themusicfest.com] Kody West started playing music just five short years ago. He began by playing acoustic gigs and songwriter competitions throughout the Dallas/Ft. Worth area. He then started opening for bands including popular Texas Country and Red Dirt acts like Dalton Domino and the Front Porch Family Band. Each show grew his following.

Doctor Nativo (real name: Juan Martinez) grew up in Quetzaltenango, Guatemala. In 1990, during the bloody, cold-war era Guatemalan civil war, Nativo’s father, Arturo Martinez was assassinated along with five of his friends. Nativo’s childhood, which began so happily, came crashing down.

By the age of fifteen, Nativo had left school and had taken up the life of a traveling musician. After busking his way through Europe, India, and Latin America, life brought him to Cuba (the country of his father’s birth), to study at the Escuela Nacional de Arte in Havana.

Eventually he settled in Barcelona, where he played music in the street, every day, for years, and found his voice through direct contact with the people.

His music revives the ancestors and lets them loose on the dance floor . . .

In 2011, feeling that the time had come, Doctor Nativo returned to Guatemala. During “El Gran Retorno”, which coincided with the change in cycles in the Mayan “Long Count” calendar, Nativo attended his first Mayan ceremony. There he discovered his nahual (Mayan animal spirit), and was brought to the elder Tata Pedro’s house near the mystical Lake Atitlán, who pushed him to pursue an intense period of spiritual study that lasted several years, with a profound impact on his music and songwriting.

His music revives the ancestors and lets them loose on the dance floor while celebrating indigenous resistance and popular empowerment with a proud assertion of Mayan identity.

Doctor Nativo’s music is buoyant and danceable, but also packs a deep message: a party with a purpose.

The show goes on rain or shine.
All performances at Miller Outdoor Theatre are funded in part by the City of Houston through Houston Arts Alliance.

Using his experiences growing up in Newark Bill Bellamy started doing stand-up while he was a student at Rutgers University. This weekend Bellamy makes his way to Houston at The Improv.

Bellamy quickly discovered how much he enjoyed making people laugh and began honing his skills at small comedy clubs around the country and soon was making waves in the New York clubs like The Improv The Comic Strip and at The Comedy Store in Los Angeles.

Two short years later Bellamy had earned a spot on HBO’s DEF COMEDY JAM where he notoriously coined the phrase “Booty Call.” The now famous late-night rendezvous moniker became the name for his first comedy special for Showtime; “Booty Call” was instantly one of the network’s top-rated specials.

The Houston Artist Commissioning Project (HACP) supports new works, across all arts disciplines, from working artists here in Houston. Over two weekends, six live performance winners in the project’s pilot year will take the stage at Jones Hall. These are Houston’s creative voices, responding to our time with uproarious creativity. 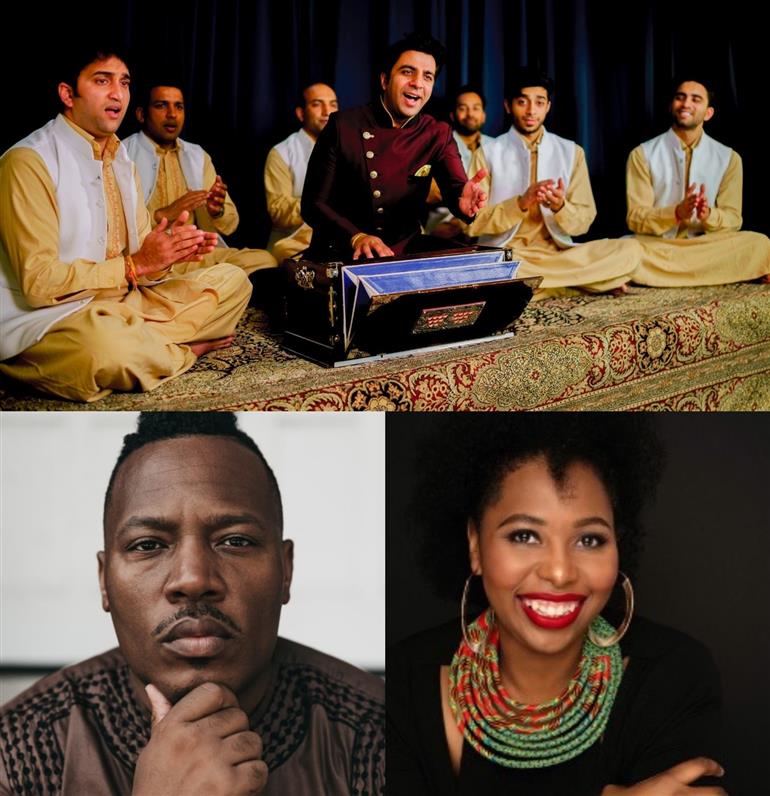 Riyaaz Qawwali
Desi Arts & Discourse
A message of harmony for all faiths, expressed in the lyrics and rhythm of music with South Asian roots.

Seating is general admission. These performances are planned to be socially distanced. Masks will be required.