Bringing together great sensitivity and commanding virtuosity, Grammy Award-winning pianist Garrick Ohlsson remains the only American to have won the prestigious Chopin Competition. This weekend the renown pianist will be at The Wortham Center in the Cullen Theatre.

Ohlsson has mastered Chopin, the irresistible poet of the piano, a profound innovator who transformed solo piano music.

Ohlsson is a master of the intimate art of the solo recital. He has a powerful presence – very tall, and with one of the largest hand spans of any pianist – and a delicacy and finesse for which he’s famous.

Since his triumph as winner of the 1970 Chopin International Piano Competition, pianist Garrick Ohlsson has established himself worldwide as a musician of magisterial interpretive and technical prowess. Although long regarded as one of the world’s leading exponents of the music of Frédéric Chopin, Mr. Ohlsson commands an enormous repertoire, which ranges over the entire piano literature. A student of the late Claudio Arrau, Mr. Ohlsson has come to be noted for his masterly performances of the works of Mozart, Beethoven and Schubert, as well as the Romantic repertoire. To date he has at his command more than 80 concertos, ranging from Haydn and Mozart to works of the 21st century, many commissioned for him. 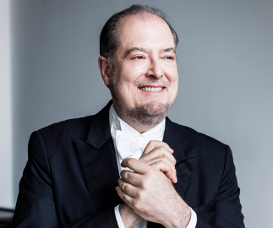 In 2018/19 season he launched an ambitious project spread over multiple seasons exploring the complete solo piano works of Brahms in four programs to be heard in New York, San Francisco, Montreal, Los Angeles, London and a number of cities across North America. In concerto repertoire ranging from Mozart and Beethoven to Brahms and Barber, he returned to the Nashville, Oregon, Dallas Symphonies, Washington Kennedy Center with Melbourne Symphony and internationally with orchestras in Seoul, Helsinki, Zagreb, Tallinn, Manchester and London.

A frequent guest with the orchestras in Australia, Mr. Ohlsson has recently visited Perth, Brisbane, Melbourne, Sydney, Adelaide and Hobart as well as the New Zealand Symphony in Wellington and Auckland. In February 2020 he accomplished a seven city recital tour across Australia just prior to the closure of the concert world due to Covid-19.

An avid chamber musician, Mr. Ohlsson has collaborated with the Cleveland, Emerson, Tokyo and Takacs string quartets, including most recently Boston Chamber Players on tour in Europe. Together with violinist Jorja Fleezanis and cellist Michael Grebanier, he is a founding member of the San Francisco-based FOG Trio. Passionate about singing and singers, Mr. Ohlsson has appeared in recital with such legendary artists as Magda Olivero, Jessye Norman, and Ewa Podleś.

Important safety information: All DACAMERA patrons will be required to show either proof of a negative COVID-19 test result or proof of vaccination, and photo identification. This policy applies to ticketed events at all of our venues. In addition, all patrons must wear a mask that covers their nose and mouth at all times, except while actively eating or drinking. Learn more.

100% Money-Back Ticket Guarantee
Some venue tickets for Weekend Houston's Planning guide are provided by Ticket Liquidator a resale marketplace, not a box office or venue. Prices may be above or below face value. Your seats are together unless otherwise noted. If their are problems with our affiliate please call us (832) 949-9691 or  contact us   (Click Here)