​Events may be cancelled or postponed. Confirm status with event organizers.

It will be Marlon Wyans this weekend at Houston's Improv as he gives us his national tour at the country's Improv venues. The Wyans show is a great weekend starter he opens at the comedy club this Thursday.

Wayans can be seen starring in the Netflix movie SEXTUPLETS which tells the story of Alan (Wayans), a man embarking on a personal journey to meet his birth mother before the arrival of his first child. When Alan meets his brother, Russell, he discovers that he was born a sextuplet and decides to seek out his four other siblings (all played by Marlon). Together, the two brothers set out on a road trip to track down the rest of the family that they’ve never known. The film premiered on the streaming site in August of 2019. Wayans recently wrapped production for Sofia Coppola’s Apple-A24 movie ON THE ROCKS opposite Rashida Jones and Bill Murray. He is currently filming the Aretha Franklin feature RESPECT opposite Jennifer Hudson as Aretha.
. . .more @Weekend Friday click here

Complimentary 4-piece. Gift with any $165 DIOR Beauty or Fragrance Purchase. Shop now at Macys.com! Valid 4/23 through 5/20

Now through this Sunday

Join Mickey Mouse and his friends at Disney On Ice presents Mickey’s Search Party, an adventure filled with world-class skating, high-flying acrobatics and unexpected stunts! Look for clues in the search for Tinker Bell through immersive, fantastic worlds. Explore the colorful spirit realm of Coco, sail away with Moana as she bravely saves her island, see Belle in the sky as the enchanted chandelier comes to life, and sing-along with Elsa in the icy world of Frozen. Make memories during Aladdin, Toy Story and The Little Mermaid as the search party becomes an all-out celebration!
. . .more @Weekend Fridays click here

The Death of George Floyd Reignited a Movement. What Happens Now?

Calls for racial justice touched nearly every aspect of American life on a scale that historians say has not happened since the civil rights movement of the 1960s.

George Floyd had been dead only hours before the movement began. Driven by a terrifying video and word of mouth, people flooded the South Minneapolis intersection where he was killed shortly after Memorial Day, demanding an end to police violence against Black Americans.

The moment of collective grief and anger swiftly gave way to a yearlong, nationwide deliberation on what it means to be Black in America.

First came protests, in large cities and small towns across the nation, becoming the largest mass protest movement in U.S. history. Then, over the next several months, nearly 170 Confederate symbols were renamed or removed from public spaces. The “Black lives matter” slogan was claimed by a nation grappling with Mr. Floyd’s death.

Over the next 11 months, calls for racial justice would touch seemingly every aspect of American life on a scale that historians say had not happened since the civil rights movement of the 1960s.

The free family friendly event is centered around Heritage Place Park in downtown Conroe extending east in downtown and will feature eight activity villages for children of all ages.

The event from 10 a.m. to 5 p.m. Saturday is hosted by the city of Conroe Parks and Recreation Department and is a free event with free parking in downtown Conroe.
. . .more @Weekend Saturday click here 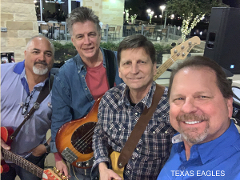 Since their formation in 2019, the Texas Eagles have quickly risen to become Houston’s premier Eagles tribute band. Performing the biggest hits by the best-selling American rock band of all time, the Texas Eagles, with their unmistakable vocal harmonies and expert musicianship, appeal to audiences of all ages as they perform the Eagles’ heartfelt ballads and rock anthems that everyone knows and loves. Our soft rock readers should be excited that the iconic Australian pop/rock duo Air Supply brings their latest tour to Houston's Arena Theatre, weekend of May 1st, 2021 following the release of their newest live album, “The Lost in Love Experience,” recorded with the Prague Symphony Orchestra. Remember soft rock? Hummm . . .our music marketing influences.

With a career spanning over four decades, Graham Russell and Russell Hitchcock met on May 12, 1975, at rehearsals for “Jesus Christ Superstar” in Sydney, Australia. They became instant friends with their common love for The Beatles and, of course, singing. Since then, the duo continues to perform worldwide, with over 130 concerts annually, and just marked their 5,000th concert in Las Vegas.