Steve Gilbert began playing blues music around the Houston area while still in high school, sitting in at clubs and icehouses before he was old enough to drink. He continued his blues education while living in Austin in the late 1970s and early 1980s.

After a stint in Los Angeles, playing in popular roots and alt-country bands in gigs all over Southern California, he came back to Houston in the late 1990s and returned to playing the music he loves, the blues.

Gilbert helped form the H-Town Jukes soon thereafter, and the band brought its old-school blues sound all over the Gulf Coast while putting out a CD to critical acclaim in 2010. Now out on his own, Steve Gilbert continues to bring the blues back home, whether performing in a solo acoustic setting or with the Steve Gilbert Band. Steve's debut solo CD, "Hempstead Highway", was released in March 2016. It immediately appeared on RMRs Contemporary Blues CD chart and has garnered positive reviews in the US and internationally. From down-home shuffles to pain-soaked blues ballads, Steve Gilbert brings the listener back to the juke joints of Houston’s past by recreating the classic sound of times gone by.

Bob Saget has starred in many successful television shows, including two of the most family-friendly shows network TV has ever produced ("Full House" and "Americas Funniest Home Videos") but he’s also an out of his mind, Grammy-nominated standup comedian for over thirty years.

Saget at Houston's Improv this weekend.

Meet face to face with North America’s most successful businesses looking for franchisees and dealers where you are.
Find the perfect full time or part time business for you.
See the hottest money-making opportunities.
Attend powerful FREE seminars on what you need to know to open a successful business!!
Take control of your future, increase your income, find your path to a better lifestyle.
Get the info you need to find the business that is right for you in one place on one weekend!
*This event will take place in NRG Center Hall E. More info at www.nrgpark.com
Sat Jun 5, 2021 11am
NRG Pkwy, Houston, TX 77054
Directions (map)

Delight in the music of George Gershwin as Grand favorite Rob Landes shares stories and reminiscences of Gershwin’s brief but brilliant life, drawing on tales of Gershwin music played throughout The Grand’s 126 year history!

Rob not only is a consummate musician but a story teller who weaves words and music together in his own special style.

Landes is an award-winning violinist who started playing the violin at 3 years in Orem, Utah. Born to a large musical family, Rob gave his first solo recital at 10 years old, performed in the Hollywood Bowl in Los Angeles on the Disney Channel with the Disney Young Musicians Symphony Orchestra, and founded a piano trio that performed actively throughout his teenage years. Rob has won first prize at numerous music competitions and has soloed with orchestras throughout the West including the Utah Symphony and San Diego Chamber Orchestra.

As a first violinist of the BYU Chamber Orchestra, Rob performed in more than twenty cities throughout central and southern Europe, and as concertmaster of the orchestra, gave a concert to a sold-out audience in New York’s Carnegie Hall. Rob was awarded full scholarships to attend Brigham Young University and Rice University where he earned a Bachelor’s in Music and Master’s in Music, respectively.

Rob Landes will inspire and charm you with the memorable music that is pure Gershwin!

As the country and Houston continue to unfold with our new normal and our pandemic numbers continuing to fall, entertainment venues are beginning to open. This weekend at Toyota Center its Mike Epps and others in what is being billed as the, "In Real Life Comedy Tour".

This week's Houston Chronicle in their "Preview" magazine highlighted Karlous Miller and DC Fly Young and their podcast, "The 85 South Show", that is gaining national favor with podcast listeners.

"On any given show, they’ll do extended, R-rated riffs on both Black and white culture, long-form skits and even break out into song with the help of their backup band. But a lot of their material comes from roasting audience members, who are usually, surprisingly quite appreciative when they sink their teeth into them. These are comics who can do an on-the-spot tune about a male, front-row attendee getting cheated on a number of times by the same girl — and have both him & the audience roaring with laughter."

Mike Epps: This seasoned comic and actor seen in blockbusters such as Next Friday and All About the Benjamins delivers wide-ranging standup sets that frequently discuss race relations, celebrity peers, and American politics.

Lavell Crawford: Lavell is perhaps best known as Huell on Breaking Bad, but he’s also been seen as himself on Chelsea Lately and heard on the Steve Harvey Radio Show.

DC Young Fly: This internet personality, comedian, actor, host, rapper, and singer-songwriter is best known for his roasting sessions videos on Instagram and Vine, as well as for returning to the improv comedy show Wild ‘N Out on MTV, VH1, and MTV2.

Back in the Black
@HOB Houston

The Back in Black tribute band is an incredible, exciting, high energy reproduction of a concert performance of AC/DC . All the members of Back in Black live in Dallas/Fort Worth area and are experienced musicians not only dedicated to the sound and look, but also capturing the power and excitement of AC/DC. We stand above the other AC/DC tributes because we include tribute performances of both Bon Scott and Brian Johnson. 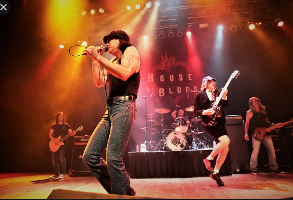 Back In Black was formed in late 2000 by former LA bandmates Mike Mroz (Angus) and Darren Caperna (Bon & Brian). Mike had always recognized the potential of this project due to Darren’s uncanny ability to transcend both the spirit of Bon Scott and Brian Johnson into his voice. Ken Schiumo (drums), Ramiro Noriega (guitar), and Sheldon Conrad (bass) were recruited from other great Dallas bands. In March of 2016, AC/DC auditioned lead singer Darren Caperna to replace Brian Johnson for their current world tour.

20th Century Fox have chosen Back in Black over all other tribute bands to record AC/DC’s classics...

They are one of the first tribute bands chosen by Live Nation/CBS Radio to tour all the House of Blues! In 2013 they were featured on AXS TV Worlds Greatest Tribute Bands and have performed their first Symphony concert with the Calgary Philharmonic in Oct 2013. They toured major arenas and theaters as part of the Classic Rock Experience in 2008/2009. They Headlined concerts at the Calgary Saddledome and Edmonton Arena.

For the fifth year in a row they will headline the worlds largest Tribute Festival, Jacks Throwback in Dallas. They also performed to over 36,000 people at the Bone Bash in Ft Worth, and have been recruited by Sony Music, AC/DC’s new record label, to promote catalog sales. 20th Century Fox have chosen Back in Black over all other tribute bands to record AC/DC’s classics “TNT” and “A Long Way to the Top” for two of their movies, Napoleon Dynamite and Garage Days.

This Weekend in Sugarland

Grab your flip flops, tropical shirts and shades and let us take you to a tropical oasis.

We will transform the Plaza into a local paradise that features live music from Hanna’s Reef (Jimmy Buffet Covers) and eye catching performances from the hula and fire dancers of Malia’s Hula Hut. Bar Louie will be on site selling beer and wine or get a liquor drink to-go with any food order from their restaurant across the street during the show.