The promoters are calling it the Worlds First Hip-Hop Food Festival.
We call it the OMG Food Fest because we are not allowing any food in our event that doesn't make you say OHHH MY GOOOOOD!!!!!
Not only are we gonna have Delicious food coming from all directions, we will also keep you entertained with the citys best Djs and bands playing Hip-Hop, Rap, Old School and everything else that will keep you moving
YOU WILL BE - Two Steppin with some Tacos - Bouncin with some Boudin - Twerkin with your Turkey Legs - or you can Boogie with your BBQ

The OMG Food Fest is May 15th from 2pm to 10pm. The Address of the event is Bayou City Event Center 9401 Knight Rd Houston Texas 77045.
There are over 60 Vendors that will be in attendance.

A new lightweight champion will be crowned at Toyota Center on May 15, as Charles Oliveira and Michael Chandler do battle in the main event of UFC 262. Brazil's Oliveira found his groove when returning to the lightweight division in 2017, and since then, he has gone 9-1, winning eight straight over the likes of Tony Ferguson, Kevin Lee and Jim Miller. Now he faces Chandler, who made an immediate impact in his UFC debut in January by knocking out Dan Hooker in less than three minutes. Don't miss UFC 262 in Houston this May! 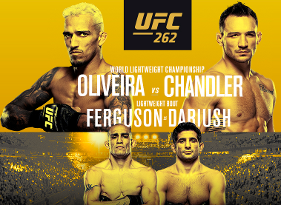 This family-friendly opera is based on the life of Marian Anderson, one of the most celebrated singers of the 20th century, who broke racial barriers throughout her storied career, becoming the first Black singer to perform at the Metropolitan Opera in 1955. This innovative fusion of opera and spoken word brings Marian’s brave journey to life through the eyes of present-day college student and community activist, Neveah. An HGO original commission, Marian’s Song, was created by two prominent Black artists, composer Damien Sneed and librettist Deborah D.E.E.P. Mouton, Houston’s poet laureate emeritus. Go to www.milleroutdoortheatre.com for more info, or call 281.373.3386.
Sat  May 15, 2021 8pm
6000 Hermann Park Drive
Houston, TX

In November 2019, Whitney launched her own podcast titled “Good For You” which features Whitney sitting down to interview both her friends and experts from a variety of fields. “Good For You” is self-produced by Whitney alongside Made By Super and records in Los Angeles. New episodes are released on Wednesdays.