For the first time ever the Houston Auto Show and the Houston Boat Show are getting hitched, bringing land and sea lovers together for one spectacular event. 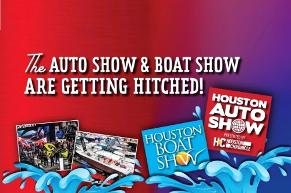 Tom Segura is a comedian originally from Cincinnati, Ohio. Well known for his Netflix specials Ball Hog, Disgraceful, Completely Normal, and Mostly Stories, Segura has also made feature film appearances that include Instant Family, Countdown, Flinch, and The Opening Act, among others. Tom is one of the top-selling touring

acts in the world, having sold hundreds of thousands of tickets on multiple international tours. Additionally, he co-hosts two of the most popular comedy podcasts, “Your Mom’s House,” with his wife, comedian Christina P. and “Two Bears, One Cave” with fellow comedian Bert Kreischer. Segura also produces multiple podcasts under his YMH Studios brand.

Paste Magazine described him as, “...having a natural and capable storytelling ability, one that lifts his narratives out of average anecdote fare and plants them firmly in hilarious ground.” Your Mom’s House Studios is home to his hit podcasts Your Mom’s House which he co-hosts with his wife, comedian Christina Pazsitzky, 2 Bears 1 Cave which he co-hosts with Bert Kreischer, and many more. Additionally, YMH Studios was one of the first networks to create wildly successful Livestream Podcast Events as an outcome of the pandemic.

Jeff Goldblum and his jazz ensemble make their way to America's Energy City this weekend at Jones Hall for the Performing Arts.

The actor has always said if he didn't study acting, he most likely would have become a jazz musician. We think this is what he is doing now and is worth a ticket to Jones Hall this weekend, September 20, 2019.

Bayou City Funk
and The Watters
@The Heights Theatre

This weekend in northwest Houston its Bayou City Funk and The Watters at The Heights Theatre.

Bayou City Funk is a collection of All-star musicians and brass players that have come together to form (one of) Houston's premiere funk band.

Drawing inspiration from the originators and pioneers, to the heavy hitters shaping the modern funk scene, BCF built their unique sound that spans the spectrum of funk.

An acclaimed mainstay of Austin’s renowned music scene, The Watters is made up of husband and wife duo Daniel and Jenna Watters, whose timeless songwriting and dynamic musicianship embodies a sound they call “Americana Soul.” The band has garnered a devoted fan base through their consistently energetic live performances and the release of three albums, including their latest, 2021’s critically-hailed INTUITION.

Cody and Noel Do: Drunk Baking

He can be foundracing on his driving simulator against proFormula 1 drivers, or playing games such as Call ofDuty: Warzone.

In addition to starring in popularYouTube series That's Cringe, and comedy duo + podcast Tiny Meat Gang with fellow comedianCody Ko, Noel has created successful series' on hisown including his format around hit BritishReality show Love Island. His broad reach has landedhim deals with companies such asSeatGeek and Old Spice, as well as solo comedy gigsacross the country.

Noel has also found success as a filmmaker, being the creative mind behind Tiny Meat Gang's hit music videos including Walk Man, which has garnered over 19 million views, and their recent releases, Broke Bitch, Daddy and Sofia, which have collectively gathered20M+ views. Outside of music, Noel recently released his first short film, Suki, a dark comedy about a relationship between a detective and a serial killer. Additionally, Noelhas recently leaned into streaming, resulting in a rapidly growing Twitch following.

Cirque Italia brings the appreciation of production and circus arts together to create a night to be remembered.

At Cirque Italia, the high-energy acts swing from ropes, flip over trapezes, and zip by on BMX bikes and roller skates—pushing the boundaries of human ability. Founder Manuel Rebecchi—the nephew of Moira Orfei, the world-renowned queen of the Italian circus—combined his family's pedigree with his own groundbreaking ideas to form a company that leaves crowds breathless and competitors hurrying to catch up.